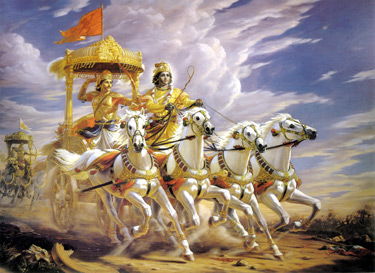 Lord Vishnu said, “My dear Lakshmi, in the town of Janasthan was a brahmana of the name Jada, who was born in the dynasty of Kaushik. That brahmana gave up the religious activities enjoined in the shastras to be followed by the brahmana class, and took to many irreligious activities. He was very fond of gambling and drinking, hunting, and visiting the prostitutes. In this way, he wasted his wealth. He went to the northern countries on a business trip. While there, he gained much wealth and decided to return to Janasthan. After having traveled a long distance he, found himself in a very deserted place. One day, as the sun set, and everywhere became engulfed by darkness, he decided to take rest for the night under a tree. While resting, some robbers came and beat him to death, and stole his wealth. Because Jada had given up all religious activities and led a sinful life, after his death he attained the form of a ghost.

The son of Jada was very religious and learned in the Vedic shastras. When he saw that his father had not returned to Janasthan after a long time, he decided to go and search for him. For many days he traveled here and there, in search of his father, and whatever travelers he would meet, he would inquire from them, about his father. One day, he met one person who knew his father, and informed him of the events that had taken place. When the son of Jada heard the news of his father’s death, he decided to go to Kasi (Banaras) to offer pinda (worship) for the release of his father from his hellish condition. On the ninth day of his journey, he happened to take rest under the same tree under which his father had been killed. At that place, in the evening, he performed his daily worship to Lord Krishna, and he also recited the Third Chapter of Srimad Bhagavad-gita. As he completed his recitation, a loud sound came from the sky. When he looked up, he saw his father there, and in front of his eyes, his father’s form changed into one of the most beautiful beings, who had four hands, and was wearing a yellow dhoti. His body was the color of a dark rain was wearing a yellow dhoti. His body was the color of a dark rain cloud and his bodily effulgence was lightening up all the directions. At that time, his father offered his blessing to him. The son inquired from the father, as to the meaning of these wonderful happenings. The father said, “My dear son, you recited the Third chapter of Srimad Bhagavad-gita, and thus freed me from the ghost form which I had received, due to my sinful activities. Now you should return to your home, because the purpose for which you were traveling to Kasi (Banaras) has been achieved by your reciting the Third Chapter of Bhagavad-gita”.

When the son inquired from the father, if there were any further instructions from him, the father said, “My brother also had led a very sinful life and he is suffering some where in the darkest regions of hell. So if you wish to free him, and our other ancestors, who are suffering here and there, in different species in the material universe, then kindly, recite the Third Chapter of Srimad Bhagavad-gita. And by that recitation they will all attain a form similar to Lord Vishnu’s, and go to Vaikuntha”.

When the son heard the father’s instructions he replied, “If that is the case, then I will recite the Third Chapter until all the souls, who are trapped in the hellish life, are freed” At that time his father blessed him with the words, “Let it be.” Then an airplane arrived from the spiritual world of Vaikuntha and took the father to his destination.

Thereafter, the son returned to Janasthan and sat in front of the Deity of Lord Krishna, and with a desire to free all of the conditioned souls in the hellish condition, started reciting the Third Chapter of Srimad Bhagavad-gita. While his recitation was continuing, day after day, Lord Vishnu sent His messengers, the Vishnudutas, to the kingdom of Yamaraja, who is in charge of administering punishment to the sinful living entities. When the Vishnudutas arrived in front of Yamaraja, they informed him, that they had a message from Lord Vishnu, who is lying on the bed of Ananta-Sesha in the ocean of milk. They told him that Lord Vishnu was inquiring as to his welfare, and also was ordering him to free all of the conditioned souls, who were suffering in hell.

When Yamaraja heard this instruction from Lord Vishnu, he immediately had all of the conditioned souls released from hell and then personally went with those Vishnudutas to the ocean of milk, known as Svetadwipa, to have the darshan of Lord Vishnu.

When he arrived there, he saw Lord Vishnu, lying on the bed of Ananta-Sesha. His body had the effulgence of suns, and Lakshmi-Devi, the Goddess of Fortune, was massaging His feet. He was surrounded on all sides by rishis, sages, and demigods, headed by Lord Indra, who were all singing the Praises of Lord Vishnu. Lord Brahma was also present, reciting the Vedas. Yamaraja fell down and offered his respects before Lord Vishnu, and offered the following praise, “My dear Vishnu, You are the well-wisher of all the conditioned souls. There is no Limit of Your glories. From You the Vedas have come, You are time. And in The course of time You will destroy all things. You are the cause and maintainer of the three worlds and You are the Supersoul in every one’s heart, who is directing their activities. You are the Guru of the whole universe, and the goal of all devotees. Oh, lotus-eyed one, please accept my obeisances again and again. Your glories are unlimited.”

In this way Yamaraja with folded hands offered his respects to Lord Vishnu. Yamaraja continued, “As per Your instructions, I have released all the conditioned souls from hell. So kindly instruct me, what work You wish me to perform now” Lord Vishnu replied in a voice as deep as thunder, and as sweet as nectar, “My dear Dharmaraja (Yamaraja), you are equal to every one, and I do not need to instruct you on your duties. Kindly return to your abode with my full blessings, and continue your duty”

At that time, Lord Vishnu disappeared from the vision of Yamaraja, and Yamaraja returned to his own abode. After that brahmana had successfully freed all of his ancestors and the rest of the conditioned souls from hell, the Vishnudutas came, and took him to the abode of Lord Vishnu, where he was able to engage in the service of the lotus-feet of the Supreme Personality of Godhead eternally.