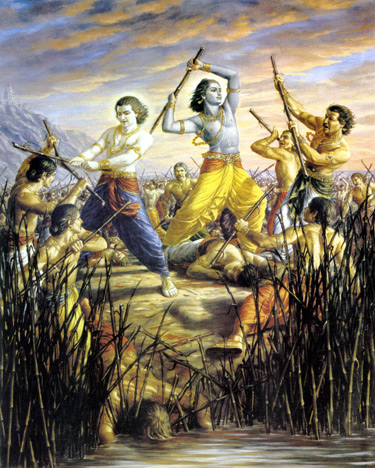 Lord Vishnu said, “Now I will describe to you the unlimited glories of the Fifth Chapter of Bhagavad-gita. Listen very carefully.

In the state of Madra, there is a town of the name Puru Kutsapur. There lived a brahmana by the name of Pingala. During his childhood he was trained in various brahminical activities and was taught the Vedas. But he had no interest in his studies. When he reached his youth he gave up his brahminical pursuits and started to learn how to play instruments as well as singing and dancing. Slowly he became so famous in this field that the king himself invited him to live in the palace. While he was living there he slowly degraded more and more into sinful life. He started to enjoy with other men’s wives and engage in all kinds of sinful activities and intoxication.

He became so proud of his position as he gained more and more intimacy with the king. He especially enjoyed criticizing others to the king in private. Pingala had a wife whose name was Aruna, who was born in a low-class family. She was very lusty and enjoyed relationships with many other men. When her husband found out about her activities, she decided to kill him. Late one night she chopped off his head and buried his body in the garden. After his death Pingala fell into the deepest regions of hell and after having suffered there for a long time he took birth as a vulture. Aruna, after freely enjoying with many men contacted venereal disease and her youthful body very soon became ugly and unattractive. When she died she went on to hell and after having suffered for a long time, she, attained the body of a female parrot. One day that parrot was searching here and there for food. In the meantime the vulture, who in his previous life had been Pingala, saw the female parrot and remembering his last life and understanding that this parrot had been his wife, he attacked her with his sharp beaks. The parrot fell down into the water contained in a human skull and drowned. Just then a hunter came and shot the vulture with an arrow. The vulture fell and his head dropped into the water of that skull and he drowned.

Then the messengers of Yamaraja came and took them to the abode of death. At that time they became very afraid remembering their past sinful lives.

When they came in front of Yamaraja he told them, “You are now free of all sins and you may go to Vaikuntha”. When Pingala and Aruna heard this they inquired from Yamaraja how two sinful persons such as they had attained the right to go to Vaikuntha.

Lord Vishnu said, “My dear Lakshmi, when they both heard the glories of Bhagavad-gita from Yamaraja they became very happy and sat down in the flower airplane which had come to take them to Vaikuntha.”

Anyone who hears the Fifth Chapter of Bhagavad-gita, even the most sinful, will attain Vaikuntha.