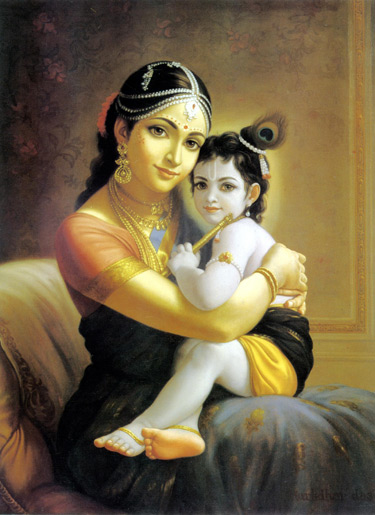 Lord Shiva said, “My dear Parvati, now I will tell you the glories of the Fifteenth Chapter of the Srimad Bhagavad-gita, kindly listen carefully.

In Gaudadesa, there was a king of the name Narasingha. He was so powerful that he was able to defeat the demigods. The commander of his army was known by the name Sarabhmerund. He was very greedy and along with the prince, he planned to kill the king, and become the ruler of Gaudadesa. But before he was able to carry out his plan, he got cholera and very quickly died. After he took his next birth as a horse in the country known as Sindhu. That horse was very beautiful and was very fast at running. He had all the qualities of a prize horse, one day, the son of a very rich man of Gaudadesa saw that horse and decided to buy him with the intention of selling him to the king of Gaudadesa. After having purchased that horse, he took him to the capital of Gaudadesa, When he reached the city he went straight to the palace of the king and requested the guards to inform the king of his arrival.

When he came before the king, the long inquired from him, “What has brought you here?” That business man replied, “Oh, king, in Sindhu I found a horse of the highest quality and it’s equal cannot be found in the whole universe. I paid very much money for it”. The king ordered, “Bring that horse immediately.” That horse was very quickly brought before the king who became very pleased with the high qualities of the horse. After having examined the horse, the king paid to that businessman whatever amount he had requested without thinking twice.

After some days the king decided to go hunting. Riding that horse, he set off for the forest, where he saw a deer, to which he immediately gave chase. Following behind that deer, he followed in every direction it turned. After some time he left the rest of his party far behind. After chasing for a long time and becoming very tired and thirsty, he stopped to take rest. He tied the horse to the branch of a tree and he himself sat down on a large rock.

After a little while he saw a piece of parchment blowing in the wind and land next to him on the rock. On that piece of parchment was written half a shloka of the Fifteenth Chapter of the Srimad Bhagavad-gita. The king started to read, and as the first sound came out of his mouth,, that horse fell down to the ground and gave up that horse-body. He attained a transcendental four-armed form and immediately sat down in a flower-airplane, which had come from Vaikuntha to take him to that transcendental abode Vaikuntha.

The king noticed that close by there was a beautiful ashram, which was surrounded by fruit-trees. Sitting in that ashram was a brahmana who had complete control over his senses. The king offered respects to that brahmana and with folded hands inquired from him, “How was it possible that my horse was able to attain Vaikuntha?” The brahmana, whose name was Vishnusharma, replied, “Oh, king, previously, you had a commander-in chief of your army, who was known by the name Sarabhmerund. He had planned along with the prince to usurp you from your throne. Before he was able to, he got cholera and died, after which he took birth as that horse. By chance he heard some words from the Fifteenth Chapter of the Srimad Bhagavad-gita and attained Vaikuntha.”

The king offered his respects to that brahmana and returned to his capital and again and again read what was written on that parchment. After a short time he installed his son as the king of Gaudadesa and himself went off to the forest, where he recited regularly the Fifteenth Chapter of the Srimad Bhagavad-gita and very quickly, attained the lotus feet of Lord Vishnu.