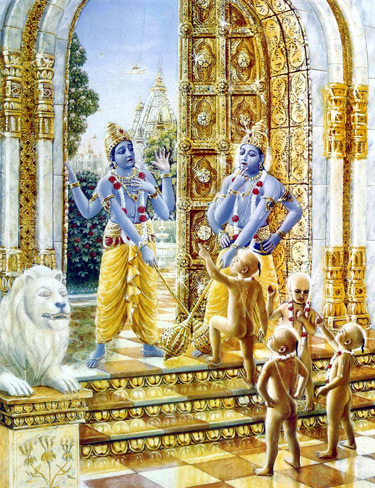 Lord Shiva said, “My dear Parvati, now please listen to the glories of the Eighth Chapter of Srimad Bhagavad-gita. After listening to this, you will feel great joy.

In the South is an important town of the name Amardhkapur in which one brahmana of the name Bhavasharma lived, who had taken a prostitute as his wife. Bhavasharma enjoyed eating meat, drinking wine, stealing, going with other’s wives; and hunting. One day, that sinful Bhavasharma was invited to a party, where he drank so much alcohol that it started to come out of his mouth. After the party, he became very sick and suffered from chronic dysentery, and after many days of suffering he died and attained the body of a date-palm-tree.

One day, two brahma-rakshasas (ghosts) came and took shelter under that tree. Their previous life-story was as follows:

There was a brahmana by the name of Kushibal, who was very learned in the Vedas and had studied all branches of knowledge. His wife’s name was Kumati, who was very evil-minded. Although that brahmana was very learned, he was also very greedy. Along with his wife, he used to collect lots of charity everyday, but he would never give charity to any other Brahmana, When their time came to die, they both attained the forms of brahma-rakshasas. As brahma-rakshasas, they continuously wandered here and there over the earth suffering from hunger and thirst.

Upon hearing this, the wife inquired, “Oh, my Lord, what is Brahma, what is the Self? What are fruitive activities?  (him tad brahma kim adhyatmam kim karma purusottama)”‘Completely by accident, the wife happened to chant half of the first shloka of the Eighth Chapter of Srimad Bhagavad-gita. At that time, having heard that half shloka, Bhavasharma broke free from that form as a tree, and again attained a body of a brahmana, completely free from all sin. Suddenly from the sky came a flower-airplane, which took that husband and wife back home, back to Godhead, Vaikuntha.

Afterwards, that Brahmana, Bhavasharma, with great respect, wrote down that half Shloka (kim tad brahma kim adhyatmam-kim karma purusottama) and with the intention of worshipping Lord Krishna, he went to Kashipuri and started performing great austerities, while continuously chanting that half Shloka.

Meanwhile in Vaikuntha, Lakshmi seeing Lord Vishnu, had risen suddenly from taking rest, inquired with folded hands “Why have You risen so suddenly from Your sleep?” Lord Vishnu said, “My dear Lakshmi, in Kashipuri, on the bank of the river Ganges, my devotee is performing great austerities continuously chanting half a Shloka of the Eighth Chapter of Srimad Bhagavad-gita. For a long time I have been thinking how to award his devotion”. Parvati inquired from Lord Shiva, “when Lord Vishnu was so pleased with His devotee, what benediction did He bestow upon him?”

My dear Parvati, I have described to you just a little of the glories of the Eighth Chapter of Srimad Bhagavad-gita.