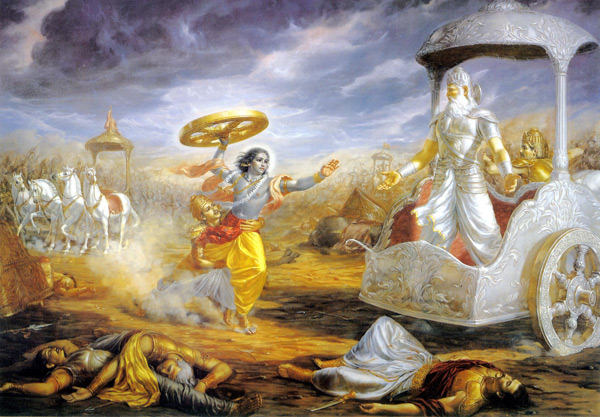 Once in the South in the town of Pandharpur, a very learned brahmana by the name of Devashyama lived. He was able to perform all kinds of fire sacrifices. He also knew the importance of receiving guest. And by his activities he managed to satisfy all the demigods. But he was not happy and peaceful in his heart and mind. He had the desire to attain knowledge of the soul’s relationship with the Supersoul, Paramatma, and towards this end he would invite many yogis and tapasvis, and render all kinds of service to them and inquire from them about the Absolute Truth. In this way he passed many years of his life.

One day, while he was walking, he saw one yogi in front of him, sitting cross-legged with his eyes fixed on the tip of his nose, totally absorbed in meditation. Devashyama could perceive that this yogi was completely peaceful, and without any material desires. Devashyama, with the greatest respect and reverence, fell at the feet of that yogi, and inquired from him, how he could attain complete peace of mind. At that time, that yogi, who had complete knowledge of the Supreme Personality of Godhead, Lord Krishna, advised Devashyama to go to the village of Sowpur and meet one Mitravan; who was a goat-herder by profession, and take instructions in the science of God-realization from him. After hearing this, Devashyama again and again offered his respectful obeisances at the feet of that yogi and immediately left for Sowpur. When he arrived there he found on the northern side, one beautiful forest where he was informed that Mitravan lived. When he entered that forest, he saw on the bank of a small river, Mitravan seated on top of some rocks.

Mitravan looked very beautiful and totally peaceful. In that forest the wind was blowing very gently and a beautiful aroma was emanating from every direction. The goats were peacefully moving here and there, totally unafraid. Some were seen to be sitting next to tigers and other ferocious animals very peacefully.

When Devashyama saw this scene, his mind became very peaceful, and he respectfully approached Mitravan and sat close to him. Mitravan appeared to be fully absorbed in his meditation. After some time Devashyama inquired from him, how he would be able to attain devotion to Lord Krishna. When Mitravan heard this question, for a moment he was lost in deep thought. Then he replied, “My dear learned Devashyama, once long ago, I was in the forest looking after the goats, when a very ferocious tiger attacked. At that time all the goats ran here and there to save themselves. I also ran off, due to fear of that tiger. From some distance I looked back and saw that that tiger on the bank of this river encountered one of my goats. At that time a strange and wonderful thing happened. That tiger lost all his anger and desire to eat my goat. Thereupon, my goat inquired from that tiger, “You have attained your food, so why are you not eating the meat of my body? You should immediately kill me, and with great relish eat up my flesh. Why are you hesitating?”

That tiger said, “My dear goat, since I have come to this place, all anger has left me, and I have no hunger or thirst”. The goat said, “I also do not know why I am feeling so fearless and peaceful. What can be the reason for this? If you know, then kindly inform me”.

The tiger replied, “I also do not know. Let us inquire from that person” When I saw this change take place in the activities of that tiger and goat, I become very much astonished. At that time they both approached me, and inquired as to the reason. I noticed that a monkey was sitting on the branch of a nearby tree. I went along with the two of them and inquired from that monkey-king. That monkey replied to our question with great respect.

“Listen, I will tell you, it is a very old story. In that forest, just in front of you, there is a very large temple in which Lord Brahma installed a Shivalinga. Long ago, a learned sage of the name Sukama, who had performed many austerities, lived there. Daily he would bring flowers from the forest and water from the river, and worship Lord Shiva.

In this way he was living here for many years, when one day one sage arrived. At that time, Sukama brought fruits and water and fed that sage. After the sage had eaten and rested, Sukama spoke to him. “Oh learned one, only for the reason of obtaining knowledge of Lord Krishna, am I living here, performing austerities and worship. But the results of my austerities have been attained today by coming in contact with you.”

When the sage heard the words of Sukama, which were full of submission, he became greatly pleased. And he wrote on one piece of stone the Second Chapter Srimad Bhagavad-gita. He then instructed Sukama to daily read those verses. “By so doing, you will quickly attain your goal.” After having spoken thus, that sage disappeared from that place while Sukama was looking on. After that, following the instructions of that sage, Sukama recited those verses daily for the rest of his life. Very quickly he attained complete knowledge of Lord Krishna. And from the day he started reciting those verses, he felt no more thirst or hunger.

And due to this austerities and devotion, at this place, any one who visits here does not, feel the pangs of hunger and thirst, and immediately attains complete peace.”

Mitravan said, “My dear Devashyama, after the monkey had finished telling us that wonderful story, I along with the tiger and goat went to that temple. We found there written on a piece of stone the Second Chapter of Srimad Bhagavad-gita. And I started to recite those verses daily. In this way, we were able to attain very quickly devotion to Lord Krishna. My dear brahmana, if you also start reciting the verses of the Second Chapter of Srimad Bhagavad-gita, you will very quickly attain the mercy of Lord Krishna.”

Lord Vishnu said, “My dear Lakshmi, in this way Devashyama attained knowledge from Mitravan and after worshipping that great soul, he returned to Pandharpur and daily recited that Second Chapter. And whoever visited Pandharpur, Devashyama would first recite before him the Second Chapter of Srimad Bhagavad-gita. In this way Devashsyama attained the lotus feet of Lord Krishna.

My dear Lakshmi these are the glories of the Second Chapter of Srimad Bhagavad-gita.