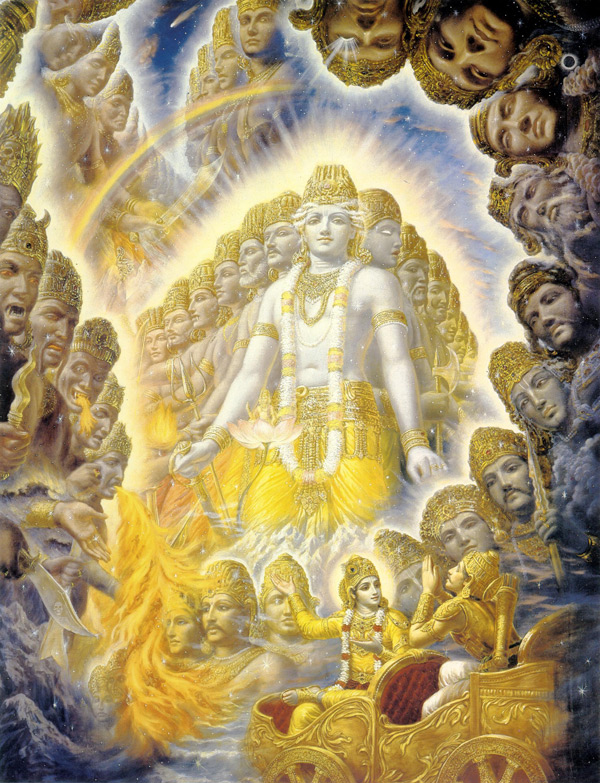 Lord Shiva replied “That person, Whose body is the color of a dark rain cloud, whose carrier is the king of birds, Garuda, and Who is lying on Ananta-Sesha, the thousand headed serpent, that Lord Vishnu, Whose glories have no limit, I am always worshipping. My dear Parvati once after Lord Vishnu had killed the demon Mura, He was resting peacefully on Ananta-Sesha, when the bestower of all good fortune of the universe, Sri Lakshmi, respectfully inquired from Him.

“Bhagavan, You are the controller and maintainer of the whole universe, but yet You are sleeping unhappily on this ocean of milk What is the reason?”

Lord Vishnu said, “My dear Lakshmi, I am not sleeping, but I am watching how wonderfully My energy is working. It is by this wonderful energy of Mine, by which I am controlling all things, and yet remain separate. And it is by remembering these divine activities of Mine, that the great devotees and yogis manage to free themselves from the wheel of birth and death, and attain that transcendental nature of Mine, which is eternal and free from all qualities.”

Lakshmi said, “O, controller of all things. You are the goal of the meditation of great yogis. Nothing can go on without You. And yet You are separate. You are the cause of creation, maintenance and destruction of all the material universes. Kindly inform me about the workings of Your wonderful energies, which are so attractive, that even You are lying here, meditating upon them”

Lord Vishnu said, “My dear Lakshmi, the workings of My multi-fold energies, and how to become free from the bonds of birth and death, and attain My eternal Nature, can only be understood by one of pure intelligence, who has an inclination to render service unto Me. This transcendental knowledge is fully explained in the Srimad Bhagavad-gita”

Lakshmi inquired, “My dear Lord, if you yourself are amazed, by the workings of Your energies, and are ever trying to fathom their limit, then how is it possible that the Bhagavad-gita can describe those unlimited energies of Yours, and how to cross over them, and attain the transcendental nature?”

Lord Vishnu said, “I Myself have manifested in the Form of Bhagavad-gita. Please understand that the first five chapters are My five heads, the next ten chapters are My ten Arms, and the Sixteenth Chapter is My stomach. The last two chapters are My lotus-feet. In this way you should understand the transcendental Deity of the Bhagavad-gita. This Bhagavad-gita is the destroyer of all sins. And that intelligent man who daily recites one chapter or even one shloka, one half shloka, or at least one quarter shloka, will attain the same position as Susharma had attained.”

Lakshmi inquired, “Who was Susharma? What class did he belong to? And what destination did he attain?”

Lord Vishnu said, “My dear Lakshmi, Susharma was a very wicked and a most sinful man. Although he was born in a brahmana family, his family had no Vedic knowledge. And he only took pleasure from hurting others. He never engaged in the chanting of My names, in giving charity, or receiving guests. In fact, he never performed any pious activities. For his livelihood he collected leaves, and sold them in the bazaar. He especially enjoyed drinking wine, and eating flesh. In this way he passed his life.

“One day that foolish Susharma had gone to the garden of one sage for collecting leaves, when a snake came and bit him, and he died. After his death he was cast into many hells, where he suffered for a long time. After which he attained the body of a bull. That bull was purchased by a crippled man, who engaged him in his service. For about seven or eight years he was carrying extremely heavy loads. One day that crippled man had piled a very heavy load onto the back of his bull. Very quickly he was forcing that bull along when suddenly the bull fell over and became unconscious. Many persons gathered there, to see what was happening, feeling sorry for that bull. One pious man bestowed upon that bull the results of some of his pious activities. Seeing that, other persons standing there started remembering their pious activities, and offered the results of some of those activities to that bull. In that crowd there was also one prostitute who did not know if she had ever performed any pious activities, but seeing everyone else offering their pious credits to that bull, she also offered the results of any pious activities she might have performed After that, the bull died, and was taken to the abode of Yamaraja, the God of Death.

There, Yamaraja informed him, “You are now free from the reactions of all your previous sinful deeds, due to the pious credits given to you by that prostitute.” Then he took birth in a very high brahmana family. In that birth, he was able to remember his past lives. After many days, he decided to search out that prostitute, who had been the cause of freeing him from his hellish situation.

After he had found and introduced himself to that lady he inquired from her “What were the pious activities performed by you, the fruits of which freed me from my hellish situation?” The prostitute replied to him, “My dear sir, in that cage is one parrot, which recites something everyday. Hearing that recitation, my heart has become completely pure. The results of hearing that recitation I had given to you.” Thereafter they both inquired from that parrot about that recitation. That parrot, remembering his previous life, started to narrate his history. “Previously, I had been a very learned brahmana. But due to my pride, I used to insult other learned persons. I was also extremely jealous. After I died, I was cast into many hells, and after a long time of suffering, I achieved this body of a parrot. Due to my past sinful activities, my mother and father died while I was a baby. One day, while I was lying on the hot sands, with no protection, some rishis saw me, and took me to their ashram, and put me in a cage. At that same place, the children of those rishis were learning the recitation of the First Chapter of the Srimad Bhagavad-gita, Hearing them repeat those Shlokas, I also, started repeating those shloka along with them.