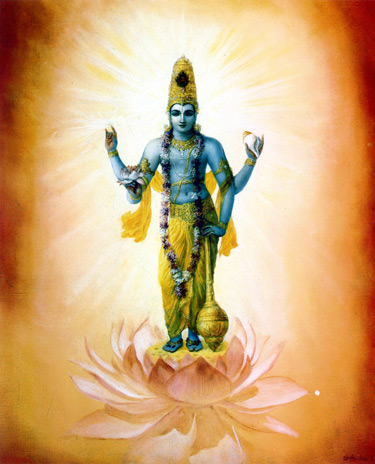 Lord Shiva said “Oh, Parvati kindly hear from Me the glories of the Fourteenth Chapter of the Srimad Bhagavad-gita, with the greatest attention.

In Simhaldvip was a king of the name Vikram-Vetala. One day, when he was going to the forest for hunting, he took his son and two hunting dogs along with him. When he reached the forest he released one dog to chase a rabbit. When that dog was chasing it, the rabbit looked as if it was flying. Running and running, that rabbit reached a beautiful hermitage, which was very peaceful. A deer were sitting happily under the shade of the trees and the monkeys were joyfully eating the fruits of those trees. The cubs of the tigers were playing with the baby elephants and snakes were crawling over the peacocks. In this forest, the great sage Vatsa lived, who worshipped Lord Krishna by reciting the Fourteenth Chapter of the Srimad Bhagavad-gita. Near the ashram of Maharaja Vatsa, one of his disciples was washing his feet while chanting the Fourteenth Chapter of Srimad Bhagavad-gita. The earth at that spot became wet. Just then that rabbit came running and slipped in the mud. Immediately that rabbit attained a heavenly body. An airplane came down, picked him up and took him off to the heavenly planets. After a moment, that dog arrived there in search of the rabbit, and he also slipped in the mud; gave up that dog body and attained a heavenly body and was also taken off to the heavenly planets.

Seeing all of this, the disciple of Maharaja Vatsa started to laugh. King Vikram-Vetala, having witnessed those amusing events inquired from that brahmana, “How is it possible that the rabbit and dog went off to heaven in front of our eyes?” That brahmana said, “In this forest, a great sage of the name Vatsa, who has completely conquered his senses, is always engaged in chanting the Fourteenth Chapter of the Srimad Bhagavad-gita. I am his disciple, and I am also by his grace always engaged in chanting the Fourteenth Chapter of the Srimad Bhagavad-gita. Due to that rabbit and dog slipping in the mud, which had been made wet from the water, which had washed my feet, they both attained the higher planets. Now I will tell you the reason why I was laughing; In Maharashtra, there is the town of the name Pratudhak. One Brahmana of the name Keshava had lived there. He was the most cruel of men. His wife’s name was Vilobbana. She was a very loose lady, who always enjoyed the company of other men. For this reason, her husband became very angry and killed her. In her next life she became that dog. And that Brahmana Keshava, due to his sinful activities became that rabbit.”