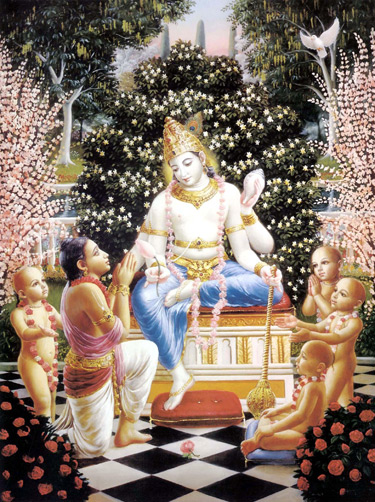 Lord Shiva said, “My dear Parvati, I will now relate to you the glories of the Tenth Chapter of the Srimad Bhagavad-gita, as related by Lord Vishnu to Lakshmi-Devi which in itself is a stairway to the spiritual world.

In Kashipuri, there was a Brahmana of the name Dhirabuddhi, who was as dear to me as Nandi, my carrier. He was always peaceful and all of his senses were fixed in the glorification of Lord Krishna. Wherever he would go, I would follow him with great love, so that I could protect and serve him. Seeing my activities, my eternal servant Bhringiriddhi inquired from me, “What kind of austerities and other pious activities has this great devotee performed, that you are personally rendering service to him?”

Hearing Bringiridhi’s inquiry I replied as follows. “Once, in Kailash parvata, in the garden known as punnaag, I was enjoying sitting in the moonlight, and suddenly there was a great wind, which caused the trees to shake with a very loud noise. Suddenly a shadow was cast all around as if a mountain was moving. Suddenly, in the sky, a very large bird in the color of a rain cloud appeared. Due to the flapping of its wings, it was causing the trees to shake and the dust to swirl around. Suddenly the bird landed on the ground and offered his respects to me and also one beautiful lotus flower. After which, he said, “Oh Mahadeva! All glories to you, the shelter of all. There is no limit to your glories. You are the protector of the devotees, who have control over their senses. And you are the foremost of all the devotees of the Supreme Lord Krishna. Great souls such as Brihaspati are always chanting your glories. But even the thousand-headed Ananta Sesha, is not able to fully describe your glories. So what to speak of a bird like me, with such small intelligence.”

After hearing the bird’s prayer, I inquired, “who are you, and where are you coming from? You look like a swan and your bodily color is that of a crow.” That bird said, “Pease understand that I am the swan-carrier of Lord Brahma. And the reason for my body having attained a black color, I will relate to you.

Just close to Saurashtra (Surat) there is one beautiful lake, from where this wonderful heavenly lotus came from. I had been enjoying there for some time. Just as I was flying off from that place, I suddenly fell to the ground and my body took on this black color. At that time I was thinking to my self. How have I fallen down, and how has my body which was white like camphor, turned black? While thinking in this way I heard a voice, coming from the lotuses in the lake “Oh, swan, get up, I will tell you the reason why you fell down, and your body turned black.” At that time I got up and went to the center of the lake, where there were five extraordinary beautiful lotuses out of which came a very beautiful lady. After circumambulating her, I inquired as to the reason of my falling down. She replied; “Oh, black swan, while you were flying, you flew over me, and due to this offense, your body has now become black. When I saw you fall down, I felt sorry for you, thus, I called you here. When I opened my mouth, the scent emanating from it was able to purify at one time seven thousand black bees, who immediately attained admission into the heavenly realm. My dear king of birds, the reason I have such power I will tell you.

Previous to this birth, three births before, I was born in a Brahmana family, and my name was Sarojavadana, my father had always instructed me in the principles of chastity and when I got married I served my husband very faithfully. One day I found a Maina (a black bird), and due to looking after it, my service to my husband became affected, for which he became angry, and cursed me, “Oh, sinful woman, you will become a maina in your next birth.”

In my next birth I became a maina, but due to my following the principles of chastity strictly, I managed to come in contact with some sages, who kept me at their ashram. One of the sage’s daughters used to look after me. While staying there, every morning and evening I would hear the recitation of the tenth chapter of Srimad Bhagavad-gita, due to which in my next birth I attained the body of an apsara in the heavenly planets of the name Padmavati.

One day, I was traveling in a flower airplane when I saw the beautiful lotus flower on this lake. Coming here, I started to enjoy in the water. At that time, Durvasa-Muni arrived and saw me completely naked. Being afraid of him I immediately took on the form of five lotuses. My two arms became two lotuses and my two legs became two lotuses, and the rest of my body became the fifth lotus. From Durvasa Muni’s eyes fire started to emanate: “Oh, sinful one, you will stay in that form for one hundred years”. After cursing me, he immediately disappeared. But fortunately, I was able to remember the Tenth Chapter of the Srimad Bhagavad-gita. And today, I have become free from the curse, due to your crossing over me, you fell to the ground and your body became black. But if you hear from me the Tenth Chapter of the Srimad Bhagavad-gita, you will be able to become free from
this situation.”

After Padmavati had completed reciting the Tenth Chapter of Srimad Bhagavad-gita, she left in an airplane for Vaikuntha. After that I came here and offered this beautiful lotus from that lake to you.”

Lord Shiva said, “After that black swan completed his story he immediately gave up his body and took birth in a Brahmana family as Dhirabuddhi, who, from his childhood, always chanted the Tenth Chapter of Srimad Bhagavad-gita.

My dear Parvati, whether one be male or female, sannyasi or grhastha in fact whatever situation one may be in, if he chants the Tenth Chapter of Srimad Bhagavad-gita, he will attain the darshan of Lord Vishnu.